Forest in your backyard 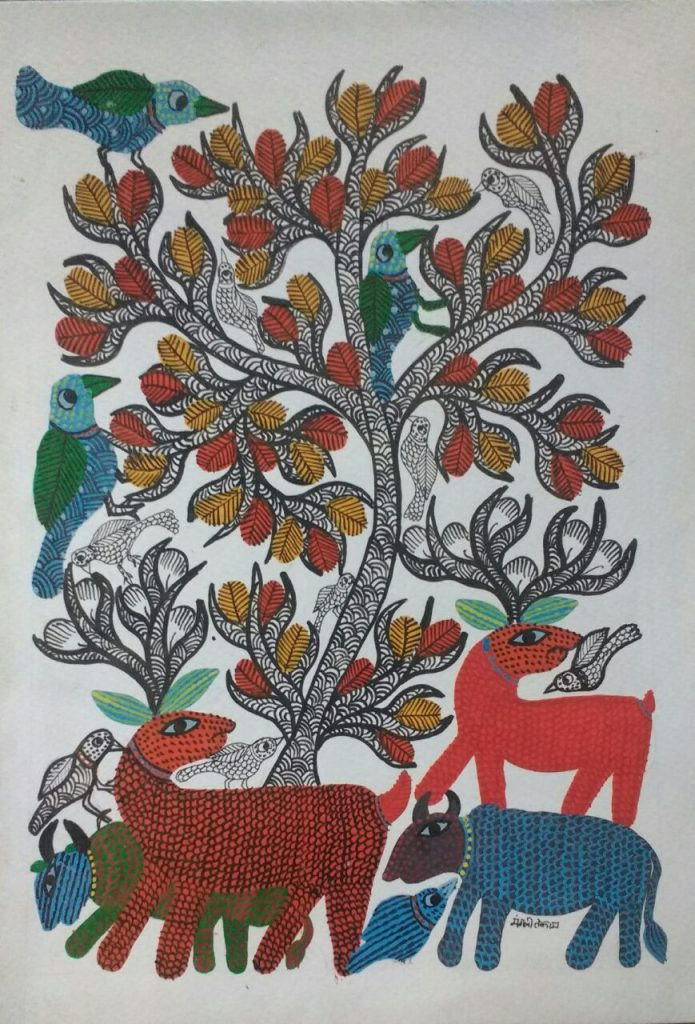 Imagine growing up with a forest in your backyard, waking up to birds chirping, foraging for food amidst nature’s abundance, side-stepping snakes during monsoons, protecting your fields from wild boars, celebrating harvests with the spirit of the Mahua tree, worshipping the Third eye who resides in the sacred Saja tree and hearing the roar of big cats while you are tucked away in your safe bed. This is the life of a Gond tribal, whose home in Patangarh, Dindori district is surrounded by the biggest tiger reserves in the country. No wonder then that the art from here is reminiscent of all these experiences and stories.

However, while the  whole forest becomes the subject of this bold art, it all began with one man, Jangarh Singh Shyam. His school is rightly called ‘Jangarh Kalam’. Born into a family of Gond Pardhans, traditional musicians who received patronage from the Gond Rajas. With the impoverishment and weakening of the social order of adivasi (local tribal) communities, the patronage eroded. With the practical significance of their story-singing gone, they turned to agriculture and labour to sustain themselves. So when he was discovered during a talent scouting program by Jagdish Swaminathan, the then Director of Bharat Bhavan, his primary occupation was herding buffaloes. His talent, however, lay in depicting the long-lost songs of his community through art. He painted on walls with nothing but charcoal, bringing to life animals and mythical creatures alike.

While his work earned recognition and fame in a short while, his death came prematurely while on a residency. He committed suicide in Japan, under circumstances that were never known. His legacy is carried on today by countless artisans from his community, for whom he is a hero, and an icon.

Following his lead, Gond artisans transform music into art. The characters of their songs come alive in their paintings in large forms. The details of these paintings are in the forms of dots, curves or lines. Each artisan develops their own such signature that they use in their paintings. Bold colours and high contrasts are common, creating a very graphical feel to the whole painting.

Jangarh Kalam evolved under the auspices of a contemporary artist. So the art, though traditional in its stories and context, has a modern visual appeal. Unlike most traditional crafts of the country, Gond paintings don’t have a border to confine them. The balance is not necessarily symmetrical.

This modern depiction makes Gond one of the most famous traditional crafts in the country. Though he may never know, Jangarh Shyam, in his short span, created a blueprint for marrying the traditional into contemporary. And for that, Indian craft will always be indebted to him.

When the Goddess comes calling